After a few minutes, I settled into my space, ready to relax, but the messengers had different ideas. Within a few seconds, the following arrived, apparently in response to the lack of background music.

Dance to the music within, for within, my Love, is where the soul of the music resides.

This messenger must have known that the CD player would not cooperate with us. For the first time since I’d been attending these marvelous meditations, there would be no external background music prior to the crystal bowls.

Take a deep breath and let your body float upon the vibrations and waves of that breath.

At this point, there was a silence that entered the room. I could feel a very deep yet gentle rumbling that seemed to emanate from deep within Mother Earth. The message continued:

These vibrations come forth from within the Earth, just as the music of stillness speaks from within your soul. The rumbling is the power behind these vibrations. It is the silence that whispers go gently to you.

Learn to tune yourself to hear this quiet, peaceful, yet powerful Guidance: We are all one.

In my mind’s eyes, I saw a small vine begin to grow. It was growing up the sides of some sort of tripod that resembled a Native American’s teepee. Like time-lapsed photography, these plants reached up, wrapping its delicate tendrils around these three poles It continued to grow and the once-delicate tendrils became the foundation for newer growth. What had started as a gentle nudge, became the foundation for further growth. Leaves began to grow from the vine, and within a few moments I saw light purple, lilac flowers of a sweet pea plant. 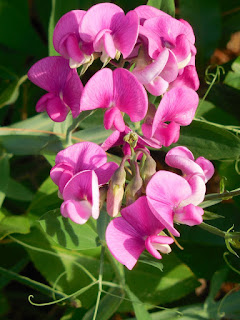 My view drew back and I could see multiple tripods or teepees of these beautiful sweet pea vines. From this aerial viewpoint, it looked like a Native American village that was filled with the breath-taking colors of the pink, lilac blossoms, combined with the green colors of the tendrils, vines, leaves, and stems.

When I thought the vision could not become any more beautiful, it did. From deep within the centers of the sweet pea clusters, blue butterflies began to rise until the Earth was filled with the greens, pinks, and lilac colors while the sky filled with different shades of blue butterflies. It was a sight to behold!

Afterword: As I received Reiki, I felt energy shifting around my throat. I had to swallow often, and it became increasingly difficult to do so. Eventually, the energy shifted and my throat area returned to its normal state. After the session, I described my experience with the group. As I was gathering my belongings to leave, Al approached me. He had been the Reiki professional who had worked on me during the meditation. He told me that he had felt the energy around my throat. He also told me that the color associated with the throat chakra (energy center) is blue. So, it made perfect sense to me. The blue butterflies that were released during my vision represented the release of the energy around my throat chakra—the energy center associated with the color blue!

What was most interesting to me was that I had written the vision down a few moments prior to the meditation beginning. Was the vision precognitive, showing me the type of energy that would be released during Reiki? Seems that way to me!
Church of Spiritual Light Meditation Renee Bledsoe The Reluctant Messenger Vision