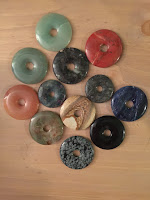 I dreamed about a gigantic stone. It was a disk of rough, brown stone with a hole chiseled through the center. I intuitively knew that this enormous pi stone symbolized the Medicine Wheel, and the opening in the center represented a portal. I saw the stone move. It looked as if an invisible set of hands had picked it up and lodged it into the side of a mountain. This enormous stone began to turn clockwise. I could feel deep rumbling as the wheel slowly cranked. Large boulders that had been dislodged from the turning of the wheel, tumbled down the mountainside almost in slow motion.

As the wheel rotated, I realized the impetus of motion had come from the eastern quadrant. Water began to drip from the center of the stone. The more the disk moved, the faster the water flowed until, after a one-quarter turn, it surged like water through floodgates in a dam.

Next, I saw the crystal mala necklace I had made, only it was enormous. That same set of invisible hands that had placed the stone in the mountainside, moved my necklace, placing it inside the opening of the giant rock. It fit perfectly, and like a cork on top of a bottle, it stopped the water’s flow.

One at a time, each bead passed through the center of the stone, and with each passing, the water’s flow changed: it stopped completely as each stone reached the center, but it flowed in the space between the stones.

The center is where the illusion of time is birthed. It represents the human vision of time. Just as each mala stone stops the flow of water, we, too, perceive that the flow of time stops, or at least slows to the point where we can only see the present.

My vision panned back and I saw that the mala necklace was in the shape of a giant infinity sign. Half the beads were above the center of the pi stone and half below. Where the necklace threaded the center of the stone, the two mala crystals had melded into one—one large enough to cover the entire opening.

Awareness during the waking state resides within those two combined mala crystals. So many of us believe the illusion that this is all there is, that our existence happens only within this space. We are squeezed into the illusion that what has already transpired was in the past and what will occur has yet to happen. But, I could see the whole picture. Time is fluid. We might perceive of time as a series of connected points, but that is only our perception. Time is like the water that rushes through the opening; it is all connected and fluid. It flows much like the sands of time in an hourglass, turn it upside down and the sands continue to flow in the other direction.

This huge stone that controls the flow is also a safety valve. The human body could not tolerate the entire flow of energy at one time. It is too much, too powerful, for the human body, so it must be done incrementally. Thus is the Way of the Medicine Wheel. Walking the path begins to open the floodgates in a systematic yet incremental manner. We are in charge. With the use of our mala beads, we can allow or disallow whatever we are able to tolerate. As we become accustomed to the flow, the wheel will turn in yet another direction. You are safe. You are protected on this most sacred journey into the oneness of all. Go with the flow.