After arriving at the Church of Spiritual Light for their twice monthly crystal bowl/Reiki meditation, I went to use the restroom before it began. As I was washing my hands, I had a vision of a gigantic yellow sun. Against this large yellow ball in the sky, I saw a tiny silhouette of black bird, soaring. Although the bird was miniscule compared to the size of the sun, I knew it was a black crow. I rushed back to my the meditation circle so I could begin to document the experience that I knew was a precursor to the upcoming event.

My perspective changed and soon the crow was huge, in fact, larger than a person. While standing just in front of this bright yellow sun, it began to flap its wings. As he beat his wings, it fanned the hot sun, like fanning a fire. I noticed the yellow sun began to take on a reddish color; it looked like hot coals. I received a message about the blood color of the sun. The messengers stated that blood is the foundation of human life, and this blood red sun represented a time for an alchemical change to occur.

Follow the path of Black Crow. Allow that Guidance to course through your veins. Become the change of this path of life.

With each beat of the crows wings, this blood red sun became hotter. It began to burn everything surrounding it, and soon there were dark gray moldering ash everywhere. As the ash smoldered, it began to sizzle as rain from above fell, turning this ash into thick muck. It thickened and it reminded me of the thick clay soil from my childhood in Kentucky.

This is the foundation of the new path. 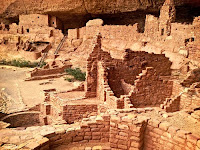 With those words, the mud began to thicken. It created a firm foundation, and I watched as the mud magically turned into individual hardened adobe brick. Like time-lapsed photography, I saw a village of adobe houses develop, from the ground upward.

The ashes rise and mix with the life-force blood, and like the Phoenix, the ash lays the foundation for a new path of life. Follow the Path of Wisdom. This is the Path of the Medicine Wheel and your life transforms and readjusts to this new Way of Wisdom. It is the letting go of old ways and walking the new path.

As Black Crow fans the flames of a great fire, transmutation occur. Energy is changed to a different vibration. Be that change. Use the tools of the Medicine Wheel to forge newer tools to live in this new world.

With those words, I realized what I had seen mixing with the ash to create the adobe mud had not been rain—it had been blood. It was that blood that had changed the color of the sun from yellow to red.

I had a vision of myself lying down inside some sort of sarcophagus. I saw small torus fields (donut-shaped) whirling around each of my seven chakras (energy centers). Parts of me were literally being drawn away from my body and then dumped in the chamber where I was lying. The energy matter from the chakras began to blend and mix together, and as they did so, the contents were rearranged. I understood that this was the transmutation that Black Crow had spoken of, and it had begun with heat from the sun. Changes were being made to my body, and I could literally see it as it happened! Could this be part of the new DNA activations I had heard about?

(After the meditation ended, one of the participants said he had seen a much younger version of me during his meditation experience.)

With no discernable transition, I found myself face to face with a beautiful horse. He had a long white forelock; his left eye was blue and his right eye was brown. He was white with large roan-colored spots. I had seen this pinto before in previous meditations, but never had a closeup view until now. I leapt on the back of the horse. I was no longer “me,” but instead I was a strong, vibrant indigenous man. The horse began galloping full speed on the newly formed adobe brick road. I could feel the wind in my hair as I stretched my arms outward as we galloped this path together. Free! Jubilant! Renewed!