I walked into the mediation room early; I was the second person to arrive. I sat down, and immediately messages began to flow.

We are all connected, at one with the universe. Breathe deeply and allow the divine connections to flow as it touches each cell in our bodies and each molecule of those cells in our bodies.

Breathe deeply and allow denser energies to be transformed. Watch as these lower vibrational energies ramp up to the beauty of the unity of oneness.

As I wrote this last sentence, I had a vision of a beautiful crystalline rose that opened at the top of the room. It floated down in slow motion until it settled in the center of the circle of the meditation room. Several others had now entered, and the meditation was about to begin. I saw streams of energy shoot down to the center of Mother Earth from this crystalline rose. Once connected to Gaia, there was a stream of brilliant white light that shot forth from the center of the rose, leading straight to the heavens and above.

Within a few seconds, the petals of the rose began to grow outward. The petals now were pointed at the tips, and I realized the rose had transformed into a crystalline lotus flower. The tips continued to grow until they reached each meditation participant. Threads of crystalline energy began to twist and weave throughout each meditation participant, connecting each of us to the divine energy of the crystal flower. I knew this represented healing energy.

Once the energy streams from the flower had firmly wrapped around each meditation participant, the petals of the lotus/rose began to withdraw, bringing our energy bodies with it. Once all of us were contained within the crystalline flower, the plant collapsed and flattened. It looked like a puddle of crystalline ice on the floor, but I realized it was like a sheet of ice that covers a frozen lake. A message began.

As odd as it sounds, I then saw this sheet of crystalline “ice” begin to expand. I was told that this is a void, a place of nothingness and everythingness. It is a place that exists between dimensions. It is a sacred place of timelessness. It is a place where all potential exists. We can step into this space, and manifest whatever we desire that will serve our greatest good.

At this point, Beth had entered the room and the meditation began.

Afterword: During the meditation, Beth mentioned the word “effervescent” several times as she described bubbles of energy that rose and popped as they released energy. As usual, Beth had a deck of oracle cards for each person to pick. When I looked at my card, there was a picture of a large glass of bubbly liquid, reminiscent of the “effervescent” connection to today’s meditation. But, the connection did not stop here. 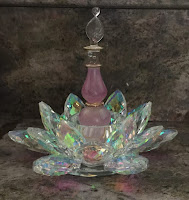 Beth also mentioned roses and using anointing with rose oil. Just five days before, I had written a blogpost about my experience about negative energy that bubbled away like an effervescent glass filled sparkling water, Sprite/7-Up, or champagne.

During that meditation, I had felt like I had been anointed and even the words from the 23rdPsalm came to me: “thou anointest my head with oil.” At the end of the meditation, I melted into a puddle of rose oil. But the connections didn’t stop there. In the evening, I was given a gift from my friend Maria. She had recently returned from a trip, and she had bought me a gift. Guess what she brought me? A dainty glass vase filled with rose oil from Egypt!