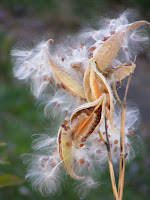 I entered the room for the mediation and discovered things had been rearranged. The crystal bowls were now located in the very center of the room with the lounge chairs encircling them. I settled quickly and quietly into my chair. It seemed like it was just seconds later that the images began to form in my mind. Each lounge chair became a seed pod; it looked like a milkweed pod. There was an opening in the top of the pod, just a perfect amount of space for each person to settle into this cocoon-type pod. It was soft inside and I felt an almost-overwhelming sense of love, security, and protection while also feeling nourished.

I had a realization as I heard the words “unity” and “wholeness” echo in my mind: this new circular arrangement of the room added to a sense of harmony and accord. There was now energy vibrational matching and completion that was not present before.

Even before the meditation began, the seed pod began to change. I simultaneously observed two separate motions. The seed pod morphed into the shape of a canoe. It looked indigenous as if it had been carved from sacred trees. It began to drift on a river of blue waters. I heard the words “Blue Danube” as I watched in amazement at this river lifted off the ground and began to curve its way into the sky until it reached deep into the cosmos.

At the same time, the same seed pod also opened wide and cast its silky-haired seeds to float on a breeze that seemed to arrive just for this occasion. I watched these feather-like seeds drift high into the air; each one rode a different air current. They were going wherever the wind carried them—going with the flow. A message came:

Be ye like the seeds upon the wind. It floats freely and without constraint. Allow Guidance to carry you to your path of wisdom. This Guidance is innate within each human. Know that you are protected as you are shepherded into this journey in life.

I had an understanding that these seeds would eventually drift downward and, once again, become Earthbound. They would find themselves in rich, fertile soil and their life cycles would begin again. In my mind’s eye, I saw one of the seeds take root. I watched as its roots broke forth from the seed and began to reach down into the bountiful soil that is now its new home. It continued to grow, fully Earthbound, until it had developed its own seed pod.

My vision panned back, and I was able to see both the canoe-like pod and the newly birthed seed pod. One had meandered upward in the cosmos as the other reached downward into the confines of Earth. I saw the shape of a body superimposed over both aspects of the pod as I heard the words “as above, so below.” This spirit body began to rotate, and the whirling increased until it became a twirling diamond-shaped star. I felt a wave of joy as I heard the words “dance of divine.”