When we connect to the divine and allow our negative emotions/energy to no longer define who we are, we begin to discover the exquisite. If we stay grounded, release negativity, and set positive, loving intentions, a whole new world opens to us. It is truly stepping into timelessness and full potentiality. It’s all there for our choosing. I hope we choose wisely.
Swinger of Birches
Goddess I Am: 08-31-2018

I entered Goddess I Am and took a seat. Music played in the background, and I saw how the melody served as a magnet, pulling energy to the center of the room. Not only was it attracting energy, but somehow I knew it was organizing the vibrations for the meditation. Loose threads came together in preparation for making a new pattern out of all there is.
As I watched this in my mind’s eye, shapes that looked like large padded buttons (that I later discovered were flat, circular seat cushions) began to float down from the top of the room. When these shapes spread across the floor, I understood that the elements of these visions were clearing the space and allowing a “settling in” of all the energy in order to create a harmonious pattern of conducive for the meditative experience. 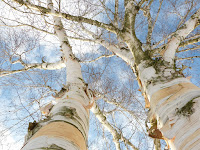 I noticed movement, and like a time-lapsed movie from the Nature Channel, I watched a beautiful white birch tree began to grow from the center of the room. As this tree expanded upward, I could feel it draw in surrounding energy, absorbing all the elements in nature for nourishment.
I heard in the back of my mind that this was the Tree of Life, and it connected us to the divine. We were grounded in this sacred space, yet we could reach divinity through this living connection.
As the Tree of Life grew, the branches spread outward toward the meditation participants. Within a matter of ten or fifteen seconds, each of us were connected, not only to Mother Earth and the heavenly realms through the tree, but also to each other. Lower vibrational energies streamed from our bodies as we released stale vibratory patterns that no longer served us, and as the tree absorbed these vibrations, I heard the following message:
There is a natural ebb and flow to life and all life systems. As humans exhale, they release carbon dioxide which is then inhaled by plants, giving sustenance. Your negative energy is released through your breath. Allow these discharged vibrations to be absorbed by the divine tree where they will be transmuted into positive energy.
When I heard these words, the vision changed. As if on cue, the meditation participants floated upward. We were suspended midair and seated lotus-style on the cushions that had materialized at the beginning of the meditation. We were connected to the tree through the off-loading energy filaments as well as tendrils of growth from the tree that had begun to wrap around us. As these chrysalis-type shapes grew, their weight pulled the branches downward. The end result: the tree began to look more like a weeping willow than a birch.
There was more movement and the chrysalises began to open into beautiful flowers. Each blossom was perfection; they were all different colors and shapes, and they were beautiful beyond measure.
As I admired the blooms, the sky appeared to open, and pinpoints of light poured down like a spring shower. This energized the tree, giving it strength and power. The trunk grew, lifting its blossom-filled branches even higher. The limbs were now sturdier than before, and I could feel the power of the tree as its energy permeated the room.
With the deluge of the light shower, the multicolored flowers began to fade and morph. Bright colorful fruit replaced the delicate petals of these divine blossoms. Each piece, like the flowers, was unique and unlike anything I had never seen. It reminded me of a Christmas tree, loaded with living ornaments filled with angelic messages of hope and salvation.
As the thread-like tendrils from the tree began to withdraw, the fruit (that held our physical bodies somewhere deep inside) became untethered. No longer attached to the tree, we continued to float upward through magnificent foliage, riding endless waves of energy. Drifting upward in this magical space, I heard that we were entering a portal of timelessness and full potentiality. All options were open to us. It’s all there, waiting for our choosing.
When we connect to the divine and allow our negative emotions/energy to no longer define who we are, we begin to discover the exquisite. If we stay grounded, release negativity, and set positive, loving intentions, a whole new world opens to us. It is truly stepping into timelessness and full potentiality. It’s all there for our choosing. I hope we choose wisely.
Goddess I Am Swinger of Birches Video