As I walked through the room to retrieve a blanket for the meditation, I overheard parts of a conversation where someone mentioned the word “wand.” A few hours before, my six-year-old granddaughter had been visiting me. She was wearing a Hermione costume from Harry Potter. She carried a wooden wand that her father had bought. (It was an ink pen, fashioned like Harry Potter’s wand.) As Lorelai rode up the elevator with me to my apartment in the condominium where I live, she was casting spells to levitate whatever she could see. I smiled as I watched her.

Hearing the word “wand” must have served as an invitation, because I immediately began receiving information from a messenger:

The wand is an extension of you. It allows for direct manifestation through the channeling of vital energies. Be still. Go deep within. Find that small spark that begins to grow like a hot ember that comes to life when fanned. Find that deep, still spot. Bring forth the energies from within and allow them to percolate. Bring forth blessings from the One Most Holy.

Surround yourself with the angels from above, for now you are set to call forth these energies to manifest through the power of the wand.

I could see in my mind’s eye the ember as it began to glow. It seemed to be located in the center of my heart. As I looked around, I could see the ember within each of the meditation participants’ hearts. It resembled a piece of charcoal that was hot, glowing like charcoal when used for grilling. I watched as this piece of charcoal began to change from a golden red color to a diamond—much like how a piece of coal becomes a diamond. I saw this large diamond or crystal become part of the wand. It became seated on the very tip, empowering the wand.

I watched the ember glow within my heart. It then began to transform and spread throughout my body. It looked as if my physical body had been transformed into a complex, crystalline matrix. Several moments later, this matrix seemed to melt into the floor and what had formally been “me” had become a flattened intricate design that resembled a snowflake or the crystal structure of a star. I then dissolved into stardust.

At this point, there was a point of stillness and nothing seemed to happen except I saw the numbers 9 and 5 swirling around me. That was a little bizarre, and I had no idea of its meaning—if there was a meaning to it.

Within a few minutes, I saw a whirlwind—a small tornado—swirling above me. It picked up the stardust that, by way of the crystalline matrix, that I had become. It took this stardust, lifted it up from the ground, and cast it throughout the ethers.

I became tearful as the following message arrived:

I am home, home to fulfillness, to completion. I am at one with the Universe. I am part of the divine whole. I have come home.

This is my essence.

This is my true self.

I am part of all that is and I cannot think otherwise.

The message continued, but it seemed to me instructional:

Use the power of unity to manifest hope, love, and divinity. Channel this energy to help bring forth peace and love in the Universe.

And with that, the messages stopped, leaving me feeling honored to have received these words of wisdom.

Once the meditation ended, I got in the car with Connie, Roberta, and Maria to drive home. What did the numbers five and nine mean? I was very curious about that. I have rarely had numbers in any of the messages. Jokingly, Maria suggested we stop on the hour-drive home to buy Lotto tickets.

Once home, I got in my car and noticed the Trip A odometer was showing—strange, that is not the screen that is programmed to show on my car. You can only get to that screen by pushing several buttons. It’s number: 5595.5! 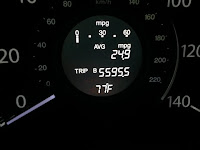