A few minutes the before the meditation was to begin, I took my seat and closed my eyes. Within seconds, I heard the word “invitation.” With that one word, the messages began to flow like spring water down a mountain side: swift and purposeful.

In my mind’s eye, I saw a closed door. As it slowly opened, it created a vacuum as it pulled energies into the room. This door to spirit seemed to invite these forces into this sacred space, as if they were required for the meditation. The opened door was the invitation, the purpose, for them to enter.

I saw a small wave of energy that looked like the silvery blue water of an ocean’s calm tide as the gentle waves lapped on the warm sands. I watched as this “water” entered this sacred space and fill the room with several inches of cool, calming, grounding energy. Before long, the room was ankle deep and then mid-calf. As the waters continued to enter through this door of spirit, a shift occurred: the room no longer filled with this spirit liquid, but instead the energy began to sink deep into the heart of Mother Earth, leaving only an inch or two of water.

As this occurred in my mind’s eye, I understood that this energy was gathering sustenance from our Great Mother, Gaia. With this thought, the energy shifted, becoming calmer as it began to soothe the people who had gathered for the meditation. As it tamed errant thoughts and emotions, the energy brought us to center stage and into unity and oneness, grounding us, and setting the stage for the meditation to begin.

Beth entered the room and began the meditation. As we began the exercise by taking deep breaths, I saw the water shift in response. The water moved from the center of the room and circled the perimeter, creating a ring. We were now were connected by what looked like a circle of silvery blue liquid. The liquid began to move up and over each participant. As it reached about a foot over each person’s head, it cascaded back into the ring that circled the room. From an aerial perspective, the silver energy resembled a crown, with the fountain over each person resembling the rounded points or tines of the crown.

This dynamic flow continued, and I realized the liquid energy was washing and cleaning us at the cellular level. It was working on each person individually. Some were receiving healing on a physical level, others spiritually, others emotionally. This energy was bringing each person into alignment. Although our healings were specific for each individual, we were part of the circle, that divine connection to Mother Earth.

At this point in the meditation, Beth guided us to connect with the Akashic Records. I immediately saw beautifully colored ribbons streaming about one foot or so above each person’s head. They were attached to the tips of the crown that had previously formed, transforming tines into a sort of maypole.


Colorful ribbons of energy floated as if they were caught in a spring-time breeze. These ribbons were about five or six inches wide and sixteen or eighteen feet long. I understood that these brightly colored bands of energy contained information from our soul’s purpose—our divine blueprint. As I gazed into the ribbons gently encircling me, I realized I had tapped into the path of the sacred, deep within the Medicine Wheel of Life, allowing divine guidance to light my path.

Tred softly yet firmly upon this most divine path. Allow the energy of Guidance to lead the way.

As these ribbons wafted in the air, they released small orbs. I was told that some of these orbs represented low-level energy that no longer served us. As they floated away from each person’s energy body, they gathered together at the top of the room. But some of these orbs were different: they were a glittering gold in color. I was told that these orbs represented aspects of past lives. As the past-lives orbs floated within each person’s energy field, I realized I was watching aspects of ourselves from previous incarnations come to the surface. As these orbs popped, these aspects from the past integrated into our current lives, bringing us closer to our soul’s true purpose. These divine bubbles opened unseen doors leading to the truth of our divine natures. It brought tears to my eyes.

I sensed more action, and I realized the orbs that carried had the low-energy vibrations away, now floated into the center if the room. Like a giant drain, these orbs were flushed deep into the heart of Mother Earth where they would be transmuted to positive energy.

I felt almost overwhelmed by the visions I had seen. I knew that there were special energies in place for this meditation—very powerful, healing energies. I gave thanks as the meditation ended. 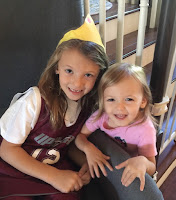 A few hours later as I was babysitting my two grandchildren, and crowns spontaneously appeared which further validated the earlier experience at Goddess I Am. Lorelai drew two crowns and cut them out for her and her sister to wear. Although Shalane loved the crown that her older sister made for her, crowns don’t last too long on the head of a two-year-old!

It was a beautiful validation for the experience earlier in the day. What a perfect way to end the day!